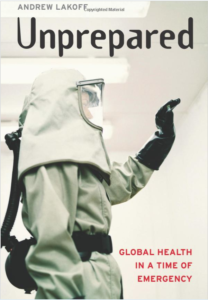 Review of “Unprepared: Global Health in a Time of Emergency” (2017)

Andrew Lakoff’s “Unprepared: Global Health in a Time of Emergency” (2017) explores the assemblage of practices, knowledge forms, and politics that underlie the production of preparedness for the unquantifiable risk of catastrophic pandemic disease under the current global health security regime. It tells the story of how “the machinery of global health security was cobbled together over a two-decade period, beginning in the 1990s… it is a story of the assemblage of disparate elements—adapted from fields such as civil defense, emergency management, and international public health— by well-meaning experts and officials and of response failures that have typically led, in turn, to reforms that seek to strengthen or refocus the apparatus.” (p. 7).

Lakoff takes the approach of “historical ontology.” In the spirit of Ian Hacking and Michel Foucault, Lakoff seeks to unmask how “taken-for-granted objects of existence—whether the economy, the psyche, or the population—are brought into being through contingent and often-overlooked historical processes.” (p. 7). This approach enables him to observe “two [current] regimes for governing global health problems: global health security and humanitarian biomedicine.” (p. 10). For him, global health security focuses on the logic of protection of powerful nation-states, particularly maintaining the smooth flow of global capital and trade that disproportionately benefits wealthy capital holders. Humanitarian biomedicine, on the other hand, takes on the “need to save all lives, regardless of political boundaries, from treatable maladies such as malaria, tuberculosis, and HIV/AIDS.” (p. 10). The distinction and relationality between these two approaches to governing global health is a central theme of this book.

How did the notion of “preparedness”—the never-ending process and series of practices of developing skills, knowledge, plans, etc. to governmentally approach managing perceived threats—come in to existence? Lakoff links the techniques of preparedness to a response to the political demand posed by the contemporary category of “emergency.” (p. 15). Different from notions of “risk” (under which probabilities of different outcomes are thought to be relatively well-known and stable, thus capable of being calculated and sufficiently technically managed) preparedness hinges on a state of emergency under which “a catastrophic occurrence… may not be avoidable and so generates knowledge about its potential consequences through imaginative practices like simulation and scenario planning. Such practices make it possible to gauge vulnerabilities in the present, which can then be the target of anticipatory intervention.” (p. 19). A strategy of government, preparedness encompasses a series of practices and techniques that are meant to support the preservation of life in a future time of emergency and includes activities such as “early warning systems, scenario-based exercises, stock-piling of essential supplies, and the capacity for crisis communication.” (p. 19).

Practices of preparedness have their historical roots in the Cold War-era national security strategies of the United States. Lakoff writes, “Given these concerns about American susceptibility to a sudden and devastating attack, Cold War national security strategists sought to ensure that the nation could rapidly put into motion an efficient military production apparatus in the midst of a future emergency.” (p. 22). Although this as a national-level civic defense strategy, Lakoff makes the argument that the normative rationality underlying these scenario-planning and preparedness exercise techniques were eventually taken up as the basis for a more general approach to health and security threats, within the United States and globally. This shift, a part of Lakoff’s historical ontology approach, is distinguished from other past regimes of governmental sovereign power. He makes the distinction between sovereign state security, population security, and vital systems security: sovereign state security being the 17th century efforts of monarchs and rulers to deploy military force to combat opposing extra-territorial forces; population security as the nineteenth century modern state’s deployment of population-level statistics to distribute risk and promote particular forms of life; and finally, vital systems security targeting the distinctive type of threat of the event “whose probability cannot be calculated but whose consequences are potentially catastrophic.” (p. 38).

The practices of stockpiling vaccine serum in preparation for potential “Swine Flu” pandemic influenza is a case example explored in in-depth by Lakoff. Under the specter of the catastrophic 1918 influenza pandemic which killed more than half a million people in the United States, President Ford made the decision to stockpile and subsequently immunize the entirety of the population of the U.S. The strategy “defied actuaries”, as no policy like this had ever been deployed and the risk of serious side-effects of the immunization were not known. Despite these various setbacks, by December 1976, forty million people had been immunized. But, because of a handful of cases of serious Guillain-Barre syndrome and no evidence of an impending pandemic, the New York Times editorialized this as the “Swine Flu Fiasco.” Rather than leading governmental leaders to question the logics ongoing preparedness in the face of unknown risks, they chose to double down instead. Failure was attributed to “administrators’ lack of foresight. The Federal health officials did not have contingency plans in place and so reacted in an ad hoc manner as unexpected events occurred. Going forward, public health authorities coalesced around the changed notion of what type of knowledge ought to be ascendant in times of emergency: “rather than statistical calculation of risk based on historical patterns of disease incidence, the emphasis of experts [should] be on knowledge of system-vulnerabilities gathered through the imaginative enactment of singular events.” (p. 65).

These logics moved to the global sphere amidst the next global pandemic threat: the so-called H5N1 influenza virus, also dubbed “avian flu.” Specifically, this situation brought to the fore the geopolitical tensions inherent in sharing biological data about viral strains, accurate epidemiological data, and other forms of knowledge necessary to assess the risk of a deadly global pandemic. Specifically, Indonesia refused to share samples of influenza virus with the Global Influenza Surveillance Network (GISN) under the—rather reasonable—assumption that this knowledge sharing (and the potential pandemic prevention it could enable) would benefit them less than the wealthy countries of the world. This example is a case study of the challenges and tensions inherent in the modern regime of “global health security” which focuses “on ‘emerging infectious diseases,’ whether naturally occurring or manmade, which are seen to threaten wealthy countries and which typically (although not always) emanate from Asia, sub-Saharan Africa, or Latin America. [Global health security] develops techniques of preparedness for potential events whose likelihood is incalculable but that threaten catastrophic political, economic, and health consequences. Its advocates seek to create a real-time, global disease surveillance system that can provide early warning of potential outbreaks, and to link such early warning to systems of rapid response designed to protect against their spread to the rest of the world.” (p. 71).

The global health security regime of global health governance is set against the regime of global health humanitarian biomedicine, which is meant to alleviate the suffering of individuals, independent of national and social identity. “Whereas global health security develops prophylaxis against potential threats to the populations of wealthy countries, humanitarian biomedicine invests resources to mitigate present suffering in other parts of the world.” (p. 72). Perhaps exemplified by Medecins sans Frontieres (MSF) and the Bill and Melinda Gates Foundation (I actually don’t completely agree with this typification, and would like to think about this more) and artfully described by Peter Redfield as having a “secular commitment to the value of human life,” it is a logic that is practiced through medical intervention. Also subsumed under this banner are the primary health care movements who have strived for a “right to health for all,” which has primarily been driven by philanthropic organizations and development aid. Lakoff links the emergence of humanitarian biomedicine to the efforts and social movements that surrounded the emerging infectious disease of HIV/AIDS.

Alongside the humanitarian biomedical response to HIV/AIDS though, was the nagging fear of the specter of continued viral and other novel infectious-agent emergence. With the advent of new tools like the internet-based reporting systems (ProMED and the Global Public Health Intelligence Network) and the outbreak of severe acute respiratory syndrome (SARS) in 2002, there was a need to govern and control the rapid circulation of information about infectious disease outbreaks across national borders: a new form of global disease surveillance was needed.

Enter the International Health Regulations. “According to legal scholar David Fidler, the 2005 IHR revision was ‘one of the most radical and far-reaching changes in international law on public health since the beginning of international health co-operation in the mid-nineteenth century.’” (p. 84). For Lakoff, these revised regulations created a new legal framework of obligations and duties—as well as obligation to accept global intervention—in a world viewed to be “under threat from ominous Emergency.” (p. 85). Central to the changes was the technical assemblage of knowledge and practices that formed the new instrument called the public health emergency of international concern (PHEIC). “This technique of classification is a way of bringing a singular event—the outbreak—into a more general category, which in turn puts into motion a machinery of action steps that guide institutional actors and limit the scope of interpretation and debate.” (p. 87). This is, purely, a mode of global governance and relocated sovereignty. “As Fidler put it, ‘the strategy of global health security is essentially a defensive, reactive strategy,’ given its narrow emphasis on detection and response to outbreaks of emerging disease. ‘The new IHR are rules for global triage rather than global disease prevention.’” (p. 94).

All told, Lakoff’s historical ontological study of changing notions and regimes of governance for managing threats of existential proportion amount to typifying the forms that biopolitics take at the world-level. As techniques of governance have moved from the relatively small-scale territories of 17th century fiefdoms and monarchies, to the post-war modern welfare nation state, to the new post-modern landscape of decreasing state-level sovereignty and fragmented/decentralized reason and authority, how does governmental power sediment and crystalize into different forms, techniques, technologies, tools, policies, and procedures? I found this book quite useful to explore these concepts through the lens of assemblages: “a grouping of heterogeneous elements that have been brought together contingently to address what is, at least in principle, a common scientific and governmental problem” (p. 122).

My interests in the notion of Bourdieu’s (and other variants) field theory runs deep. A challenge, as I’ve learned and thought more a field theory, is its, at times, lack of “materiality.” I mean that sometimes it seems as if fields of practice are theorized as purely “social” in the sense that they are a “free market” of competition between different forms of field-specific capitals. I’m not sure Bourdieu well accounts for the types of power-sedimenting/crystalizing, field-distorting effects of things like material/technical assemblages developed and deployed by powerful actors attempting to govern in contingent and uncertain situations. So, some questions that emerge for me:

UTMB
Not the revolution…but not the end of the world – Trouble and Strife
Fake Social Media Accounts! Should I Worry?
Baths of Budapest – FAQ - Baths Budapest
IRREGARDS
There's Less Of Callum Robinson Than Before . . . But Cardiff City Pray He's Still As Sharp - Dai Sp...
Gareth Bale Bows Out . . . And Leaves A Void In Welsh Football That May Never Be Filled - Dai Sport
Meet the Debut Author: Lucy Ashe, Clara & Olivia, @LSAshe1 @OneWorldNews #ClaraAndOlivia #DebutAutho...
Reflection
Raegan Sealy Tries to “Make ’em Jealous” on Soulful Debut Single
I Wish It Could Be Christmas Every Day – Book Review
Matched Pair 18 – Release

208. Mexico’s Low Intensity Conflict, FTX, CBDC and the Future of Freedom in Cryptocurrency with K