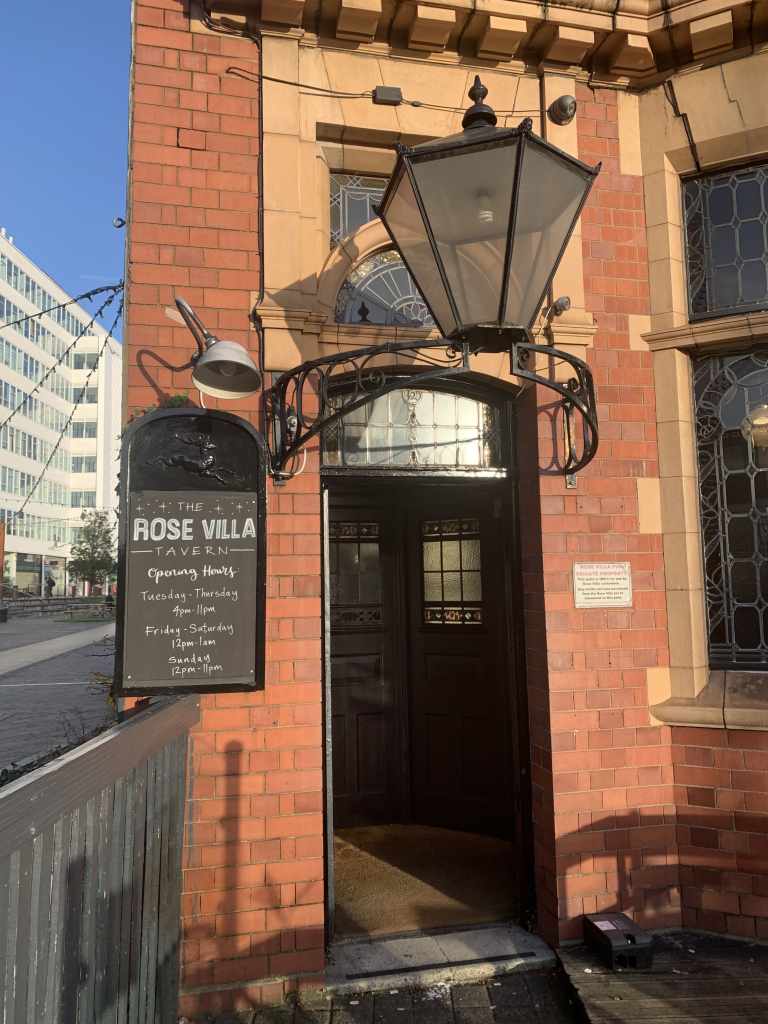 You left me celebrating the rebirth of a couple of boozers in Brum whilst trying some remarkably good amber nectar – what could be better?

I’ll tell you what could be better – three more pubs in Brum as the continuation of a day on the lash a cultural visit exploring some of the Second City’s finest hostelries continued.

The 786 – Rose Villa Tavern B18 6JW doesn’t open till 4pm so I had time to have a quick bite in Gregg’s and admire the Chamberlain clock and architecture of another of Brum’s pubs.

It really is iconic and has been there since 1903 as commemoration of Joseph Chamberlain, an MP for the area in the 1900s.

Chamberlain was a resident of the Quarter, living on Frederick Street. He was actively helping jewellers with his campaign to annul Plate Duties, a tax that had affected jewellery tradesmen of the time

Anyway, enough if the history lesson apart from the clock had fallen into a state of disrepair, but, in 1989, Chamberlain Clock was fully restored and is something else worth preserving.

I was first punter in, which is always a good sign and I was welcomed with a tidy pint of Mad Goose (Purity) and general bar banter as the staff got themselves ready.

It was quiet but it’s always been a favourite of mine this place as it is eye catching as you come into the JQ.

Moving on it was time for a pub that I’d never been too before and is relatively new (i.e last decade) on the scene.

787 – The Button Factory B1 3HH had more of a post work crowd/business feel to it and the prices reflected that as I think I stumped up over £6 for a pint of Gamma Ray (Beavertown).

The barmaid was friendly and there were a reasonable amount of punters in…I thought I’d ask and see if they had any beermats but she said they’d run out but at least, in this modern era, she knew what they were!

This place was The Vertu Bar up to 2016 but has used the fact William Elliot patented cloth covered buttons here almost 200 years ago and it’s an impressive building.

There was a good buzz about the place and with disused areas being restored into apartments all the time then there is plenty of footfall around here to support these pubs along with the office workers as well.

Final port of call was via Summer Row and 788 – The Shakespeare B3 1JJ. With the amount of roadworks/building works etc that has been going in this region of the city then this boozer has done very well to survive.

I can’t recall what I had but it was a decent pint of cask and there was sport on the box and pretty much all tables were taken without feeling too full.

It’s part of the Nicholson’s chain like The Old Contemptibles and Bar Bacchus so will focus heavily on food but always has a decent pint on too.

Earlier in the day I did manage to stop off at The Good Intent again for a revisit and and had a cracking pint of Craddock’s Beer (Monarch’s Way), a packet of crisps and a cob all for a fiver, which seemed remarkably good value.

So, it’s safe to say there are still plenty of classic boozers in Brum but use them or lose them over the next couple of months as they need plenty of punters.

I’ve now managed to tick off 60 pubs in Birmingham (Digbeth and Hockley) since LifeAfterFootball started back in 2017 and there are still many more on the radar in this ever evolving #pubcity.

A man looking to visit as many pubs as possible in the Midlands and prove that the great British boozer is alive and kicking! View all posts by lifeafterfootball839

Your Corona-virus Song of the Day. Nineteen.